Police officers are there to help people whenever they are in need. Their duty is to serve and protect everyone in their community, and that includes animals too! As much as they can, cops also do their best to help out our furry friends.

A gray and white Pitbull was seen roaming around an industrial area in New Jersey. Luckily, one of the patrol cars of the Mount Laurel Police Department saw him and came to his aid. The puppy was all alone and had a small injury on his forehead. 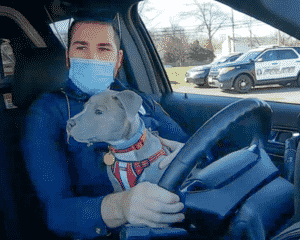 The cops immediately brought the poor puppy to the nearest shelter to have his wound treated and to give him a nice, warm meal. They posted on their official Facebook page that the pooch was brought to the Burlington County Animal Shelter.

A lot of concerned citizens saw the post and were concerned about the pup. As they were asking for updates, the Mount Laurel Police Department was happy to announce that the puppy was doing well. Moreover, a cop from their team has decided to adopt him.

Officer Matthew O’Hanlon absolutely loved Pitbulls since he previously owned one. The timing couldn’t be more perfect since he and his fiancé have been searching for a new dog to adopt. Seeing the injured puppy, it was hard for them to say no to the poor pooch.

Lost dogs usually have microchips so authorities can scan and trace them back to their families. However, the little Pitbull didn’t have anything that can lead them back to somebody. When nobody claimed him, Officer O’Hanlon was sure that he needed to take care of the pupper.

Together with his fiancé, he was very excited to turn this pup’s life around. The puppy now goes by the name Thor. His new fur parents are ecstatic about having him in their life and couldn’t wait to spoil him with a lot of love and care in his new forever home.

Officer O’Hanlon says that he is grateful for the different opportunities that his job brings. Being a cop, they always encounter the most unexpected things. And for him, his job makes it all worth it when he found the chance to meet Thor.

It’s always a wonderful sight to watch a baby start …

There are events in our lives we sometimes wish to …